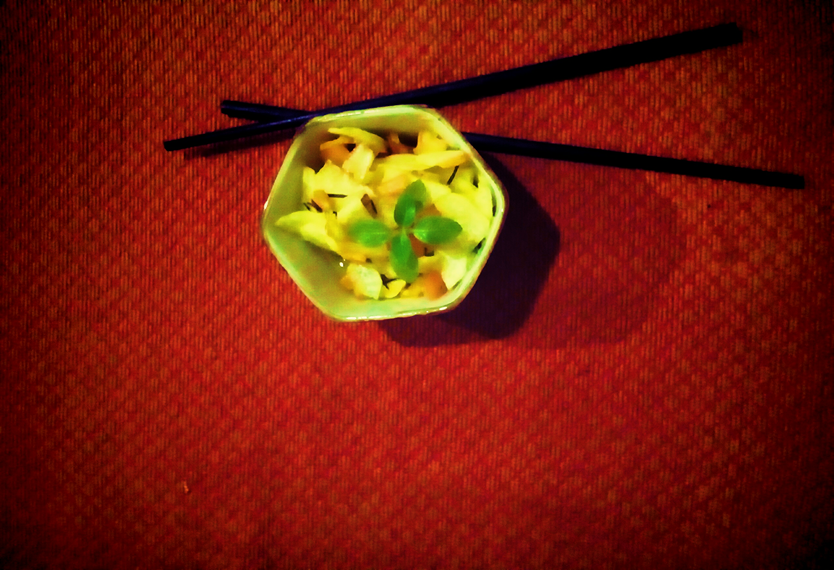 I had just refined my way of toasting the bread with the use of a small pan I bought from the nearest mall three days after my arrival in this new place. I tossed aside the pages of readings still unfinished before I slept at 2AM early this morning, and put my mind into the toasting, feasted my tired eyes at the slices changing from pale bread color to amber with traces of brown lines like the tiny contours of the pan. I turned each slice from side to side while making some mental note to buy loaves among my pasalubong for our younger boy, months after today, on my return flight back home. We don’t have this in our local bakeries or pastry houses yet. He would surely love this kind as I do. Something you and our older boy wouldn’t take.

I’ve stayed faithful to my personal rule—never start the day without breakfast. Our small family has followed such through the years. You have long given up your brunch habit because I’ve insisted it should be done before nine o’clock.

Then I heated the tender beef strips, left-over from the dinner I had in the Cafeteria. It was a relief that I managed to apportion one serving for two meals. This would justify its price which was almost thrice as much as the price in our school canteen. I added trickles of soy sauce, a handful of onion slices and a dash of brown sugar, an additional condiment for a hint of sweet our boys would always demand.

Mixing my morning hot drink came next. Half sachet of my usual coffee, two teaspoons from the Javanese blend an Indonesian friend had given me, a teaspoon of my favorite Chocolate drink mix, a sprinkle of cinnamon, and an additional brown sugar to make it just perfect.

This was a rare luxury of preparation I used to enjoy only on Sundays back home. I shoved the books and the papers from the center of the study table to give way to the meal set. I assembled the bread and beef plates, the lacatan and the cup of my newest concoction just in time for our routine morning call. I had my first two sips of the coffee mix when you rang.

Our usual conversation would spin around the kids, their new tricks, their eating habits, their school updates, their assignments, the bills, the house, some sweet nothings, how was last night’s sleep, what’s new, what’s up for the day,

But today, right after you hear my greetings, you told me you have something funny to tell.

You told me how the thought of breakfast didn’t really cross your mind this morning. You totally forgot, so you didn’t have one; and the boys left for school on an empty stomach.

The question was left unanswered as your call was interrupted. Was it the battery? Or was it the signal? Did you run out of load? Or did one of us press a key? I couldn’t recall. What I remembered were the early morning scenes on weekdays back home. My mind raced back to our breakfasts on typical mornings when we were on a rush for school, when the days got tighter because Lena left us to start her own family, when we braved and decided we would manage meals and our home chores all by ourselves.

Our breakfasts began with topsy-turvy preparations. The cooking was done in between prepping the kids, bathing them, dressing them, fixing their socks and shoelaces, preparing their bags, stuffing their snack boxes, putting hankies in their pockets and hundred other things. Preparing the rice, an imperative part of the meal, was done right after we got up from bed, intermingled with waking the boys up or literally pulling them from bed. We took turns urging, pushing, and assisting the kids to brush their teeth, as one of us would take stuff from the fridge, thaw this and slice that. You did the frying or blending and boiling the saucy kind as I administered the kids’ bath. You’d leave the food sizzle as you washed the car in between checking if the fare’s done. You’d dress up while I packed the cooked food in containers. I’d have the time for myself as you loaded our bags in the car, tucked the kids inside and steered the car out from the garage. Still in disarray, but we’re set to go.

All seated inside the car, we’re ready for our breakfast ceremony. I would carefully lay and secure the food containers on my lap and gently turn sideways to the rear to face the boys now ready to open their mouths. The first one to say ahhhh would get the first spoon. There was seldom any contest as to who’d go first. While we needed to prod the older, the younger tot would have opened his mouth even before I was ready. So the spoon rounds began—one and two; first and next. At times you’d join, there would be three serves in a round—one and two and three; first then next then next. The rounds rolled as we took the forty minute to one-hour ride to the boys’ school campus. When we regaled our mothers about such ritual, your mother frowned and my mother squirmed lamenting at the idea of using the same spoon. The boys would have their morning drink just before they kissed us goodbye. They’ re off for their morning class while we wheeled towards the other campus for our early morning work. On our way, I’d have my turn.

Such reminiscing was cut when you rang again. I wasn’t able to take it on time for I was still chasing thoughts to explain my take of your deed this morning and readying to press tips, reminders, do’s and don’ts. I bent to return your call, but something in my throat got in the way and my sight blurred.

So, I didn’t finish my coffee, pushed back the bread, covered the beef and managed to text you: I didn’t have mine too.